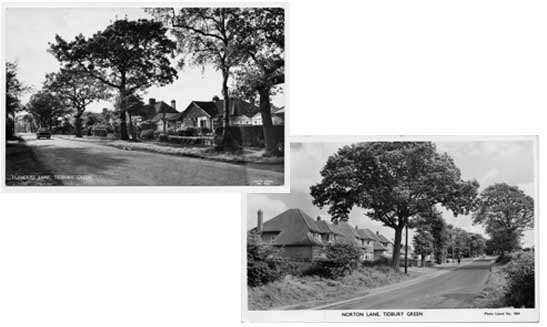 Tidbury Green is a small settlement in the south western corner of the Metropolitan Borough of Solihull within the Blythe Ward. Prior to the 1930’s Tidbury Green was a rural area comprising a number of farms centred on crossroads that provided passage to south Birmingham, Earslwood and Grimes Hill from south Warwickshire. In the 1930’s major development took place and much of the housing in Fulford Hall Road, Tilehouse Lane, Lowbrook Lane and Norton Lane was built. This development continued spasmodically to the 1990’s through infilling along Norton Lane and Fulford Hall Road. Since that date development has been very limited as Solihull Council policy sought to protect the rural nature of the area. Government policy in late 1990’s encouraged the use of existing sites for development which has made Tidbury Green a target for developers due to the relatively large plot sizes on which dwellings stand.

Tidbury Green is characterised by detached houses, semi-detached houses and bungalows that are set back from the roadway and interspersed with many oak trees. It is a mature area but one whose isolation is threatened by the development at Dickens Heath and the close proximity to Grime’s Hill.

With the building of the M42 coupled with the general growth in traffic the area has become something of a ‘rat run’ for vehicles wanting to access Solihull and the south side of Birmingham.

Tidbury is the highest part of the Borough reaching 505ft (sorry, 154 metres) which is why snow seems to last longer here. You could say that the rest of Solihull look up to us!

Those of you who have bent your spades and garden forks digging in the garden can blame the last Ice Age which finished a mere 10,000 years ago. A huge ice sheet centred over North Wales deposited a thick layer of boulder clay over Tidbury Green. Boulder clay as the name suggests is a mixture of stones, boulders and clay. If you keep on digging you will eventually come to Keuper Marl which is the main underlying rock.

The Name Of The Parish

Tidbury Green seems to have taken its name from Stephen Tyberes or Tybray, who, in the reign of Edward III, gave “a piece of land in `the Market Town of Solyhull, with a building thereon’ for the use of the inhabitants of Solyhull.” Quite what they did with the land and building remains a mystery.

Tidbury Green School was opened in 1931 and offered education for 100 pupils.

In 1981 in the general review of school places that took place it was put under threat with closure but it offered:
– Only focal point for village life
– Good academic record
– Is part of the fabric of the village

In early 1982 the parish was offering financial support for a campaign to keep the school open.
In 1987 the Council agreed to fund its redevelopment and Ken Meeson said “There is a great deal of local concern about the future of the school. I urged strongly that the council should show good faith to local wishes by giving an assurance about the future of the school and come out clearly with a commitment to rebuild it.” The Council agreed to fund a £430,000 development at the school.

Soon after this go ahead was given a detailed structural survey indicated that the school was in a far worse state than had been expected and rebuilding was being discussed. By the end of 1989 a deal was being discussed in which Hockley Heath Parish Council (HHPC) would provide 3 acres of their land on which to build the new school and a new village hall and special recreation facilities. This new school was to be a two form entry and ultimately to have 500 pupils.

In April 1990 the Council finally gave the go ahead to build the new school and village hall although this was not without controversy as to whether a two form entry school was necessary. It was justified on the basis that “A new school is needed especially in relation to the new building development in the borough and as children are coming from Hereford and Worcester to get to the school. It also plays an important community function so it makes good sense to have a joint facility with the village hall.” It was also said that “the current one form entry is insufficient to cope with the number of children expected from the number of houses built in the Hockley Heath Parish”. Cllr Messon said at the Council Meeting “Tidbury Green School attracts many pupils from outside of the catchment area and if we get a brand new school it will attract even more.”
HHPC was very supportive of the whole programme having not only provided the land but also offering up to £20K to support the Village Hall.

A year later in June 1991 the plans were shelved as the Council received insufficient Government funds and it was not until 1994 that work began and the new school finally opened in 1995. Part of the delay was blamed in 1992 on the new 700 home village in nearby Dickens Heath that was to be built on Green Belt land.
Copyright © 2016 Tidbury Green Parish Council. All Rights Reserved.